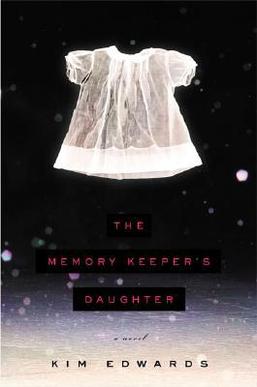 Book –Set in 1964, The Memory Keeper’s Daughter by Kim Edwards easily connects to our modern world.  On a stormy Winter’s night, Dr. David Henry is forced to deliver his own twins.  The first one comes easily, a perfect baby boy.  But the twin, his daughter is different; the doctor immediately sees that she has Down’s Syndrome.  Before his wife can notice, he hands the baby girl off to his nurse, instructing her to take the child and leave her at an institution.  He then tells his wife that her daughter was a stillborn, in his mind saving her and himself from the anguish of raising a child with disabilities.

But the nurse, Caroline, can’t bear to leave the baby, and decides to run away and raise the child as her own.  Though separated by distance and lies, the lives of the infant twins and their families are forever intertwined.

In a new city, Caroline raises Phoebe in a happy and loving household.  Meanwhile, the doctor is faced with his wife’s grief over the loss of her infant daughter.  In her mourning, their son Paul grows up in a distant family full of regret and anguish.  His mother is never able to console her heartache, carrying her grief throughout her life.

Kim weaves a story that is powerfully real, illuminating the loss of a child with the gift of a new life.  In our modern world, the doctor would have been able to foresee his daughter’s disability in the womb.  Would he and his wife have terminated the pregnancy, knowing the difficulties they might face? With such high awareness of disabilities like Down’s Syndrome in today’s society, there is so much support available for parents and families.  It’s interesting to wonder what might have been, if these fictional characters represented real people living in the 21st century.