Book – Helen Franklin is not happy with her life. She’s worked hard not to be; she is atoning. An English expatriate, she works as a translator in Prague and has only a few friends. When one of them is given a mysterious package of documents by an elderly man working on his memoirs, he spirals into paranoia and fear, dragging Helen with him. Who is this person Melmoth who appears in so many historical writings? Is she a myth or a bogeyman, or is she truly the witness to all humanity’s wrongs, Helen’s included?

I first read Melmoth the Wanderer, the 19th century gothic novel that served as the inspiration for Perry’s new one, on the sunny patio outside my college library, so I was primed to love this book. This is a lovely modernized echo of the original story. In this version, Melmoth is a woman, a lonely creature who longs for someone as broken as she is to keep her company. Told in the fine gothic style of nested narratives – one character reading a story written by another character, which contains a story told to them by a third party – we meet a variety of Melmoth’s potential companions throughout history, from a sixteenth-century nobleman to a young German boy in Nazi-occupied Prague, to Helen’s own tragic history.

Although the story is all about guilt and atonement, and whether or not some things can be atoned for, it’s not as bleak as that makes it sound. There is also a great deal of compassionate humanity and people being better in spite of themselves. I’m happy to report that I loved this book exactly as much as I expected to, and I’m looking forward to whatever Sarah Perry brings us next.

Book – The Villarcas are tied to Rawblood, their estate in the Devon countryside. If they stay away from it too long, they sicken and die. But if they stay home, they are tormented by her, a curse of the Villarca bloodline, the ghost of a tortured young woman who tortures the residents of Rawblood in turn. At the turn of the twentieth century, young Iris Villarca is determined to find a way out from under the curse. Decades earlier, her father does his best to push his lover away to keep them both safe. In Italy, Iris’s grandmother finds herself strangely drawn to – and repulsed by – a Spanish expatriate. In the end, the curse ties them all together.

The Girl from Rawblood is a classically Gothic novel with all the trimmings: a huge empty house, a ghost, a family curse, a series of mysterious and unread letters. (And, unfortunately, quite a lot of that peculiarly English racism against European foreigners.) Pulling the Gothic all the way into 1918 is a particularly nice touch: while I liked the history of the family, Iris’s story, wrapped up in World War I, was by far the most fascinating. If you like your ghost stories equal parts frightening and heartbreaking, this is the book for you.

Book – A. never knew he had an eccentric millionaire uncle in America until his uncle died, leaving him an eccentric old mansion in America — with, as Edith Wharton says, supernatural enhancements. There’s the ghost in the second-floor bathroom, of course, but she’s nothing compared to the mysterious notes and encoded messages scattered around the house, the nightmares plaguing our narrator, or the growing implication that maybe A.’s uncle didn’t commit suicide after all. The mysteries only grow deeper as A. and his friend Niamh begin to uncover the details of the secret society centered around their new home.

The Supernatural Enhancements is told in an unconventional style – letters from A. back to Europe, transcripts of audio and video recordings, and conversations from Niamh’s notepad (she’s mute). This has the potential to get confusing, but I found that the story flows pretty seamlessly for the most part (except for a few places where it’s obviously meant to be confusing). More importantly, this gives the reader the chance to figure out some of the puzzles at the same time as the characters, if you’re inclined to that sort of thing. Me, I’m happy to let the characters do the hard cryptographic work for me, but if you like puzzles and ciphers, this is a great book for you.

Book – Ruth and Nat are a couple of teenagers about to age out of the Love of Christ! foster home in upstate New York. Traumatized after her older sister aged out and never returned for her, Nat is the only person Ruth has left in the world. That is, until a mysterious stranger appears at the home and suggests a way out – they can exploit Nat’s purported ability to speak to the dead, and make a living for themselves.

Interwoven with this story is that of Cora, a young woman with a boring job, a new pregnancy, and a boyfriend – a married man she’s been carrying on an affair with – who wants nothing to do with a baby. Before she can decide what to do about anything, her long-lost, much-loved Aunt Ruth turns up at her house in the middle of the night, and Cora finds herself following Ruth on a shoeleather road trip, walking across the countryside to a destination Ruth won’t explain.

I picked up this book entirely based on the title – Mr. Splitfoot was the name the Fox sisters gave the spirit they claimed to be communicating with when they invented seances and Spiritualism in 1848 – and although it wasn’t the story I was expecting, I was totally blown away. Part ghost story, part mystery, partly a story about knowing who your family is and what you can rely on them for, this is going on my list of best books from 2016. 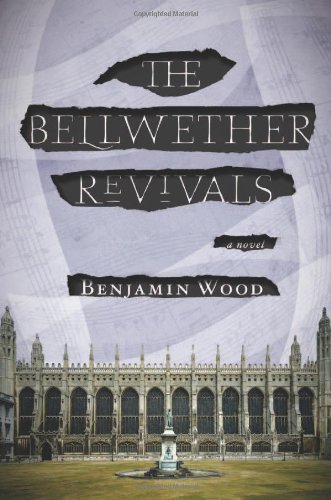 Book – Oscar is doing pretty well for himself. He’s found his way to Cambridge, working his way through his degree as an aide in a nursing home, where he meets the most interesting characters. He never loses his head, though, until he meets Iris Bellwether at one of her brother’s church services (he plays the organ). A little light church music isn’t all Eden Bellwether is interested in, though, and before he knows it, Oscar is drawn into Eden’s circle of admirers, accomplices and experimental subjects. Eden believes that his music has the power to heal. He might be right.

This spectacular Gothic novel by debut author Benjamin Wood sucked me in from the wonderful two-page prologue. It’s been repeatedly compared to Donna Tartt’s The Secret History and Evelyn Waugh’s Brideshead Revisited, but as I’ve read neither of those, I couldn’t tell you how accurate the comparison is. I can tell you that I fell in love with all the characters, who are by turns symbolic and wonderfully genuine, and that the tense, surreal atmosphere was sustained well throughout the book. I’d recommend it for a book club – there’s lots to talk about.