Book – Not all cookbooks are created equal. The Sweet Home Cafe Cookbook is published by the Smithsonian Institution, so you will be educated as you cook. Cooking and becoming smarter go hand-in-hand! Most of the recipes are accompanied by a beautiful color photo and are elegant enough for the seasoned chef, but are also reader-friendly: easy to follow, concise, and do not scare off cooking newbies.

Recipes from the cafe fall under three categories: classic, regional, and modern. And in each corner of the page, we are unobtrusively informed of what area or region, such as the Agricultural South, the food originated from. Black and white photographic images of subjects ranging from the Student Nonviolent Coordinating Committee at a restaurant in Georgia, to a full-service vendor standing in front of his sign serving Po-Boy fruit and the ‘Best’ shoe shine in New Orleans, or an owner and a patron in his barbecue joint in Harlem, enriches readers and/or would-be cooks of the Black Diaspora.

One of my favorite characteristics of this cookbook is how recipes call for a “pinch” of this or that. My favorite recipes? Fried Green Tomatoes, Grilled Snapper with Creole sauce, and Son-of-A-Gun Stew. For the health-conscious, try recipes for: Baby Kale Salad; Collard, Tomato & Cashew Stew; or Pan-Roasted Rainbow Trout. Bakers can’t go wrong with Bourbon Pecan Pie or Fried Apple Hand Pies. What long days (or weeks) or hot summer afternoons (or nights), couldn’t be cured by a Hibiscus & Ginger Sweet Tea, or a Sparkling Watermelon & Lemon Verbena drink?

Book – Hygge, the Danish concept of coziness and wintery happiness, is all the rage right now, but the Danes don’t have the market cornered on winter bliss. Winter is a wonderful time for all kinds of making things – making presents, baking treats, crafting warm and cozy things out of yarn. (Is there anything better than a nice skein of yarn and a hot cup of tea on a snowy afternoon?) In this book, Emily Mitchell offers a range of crafts and activities suitable for the long, cold winter months, including tasty recipes and lovely crochet patterns. Her projects span the whole of winter, from the late days of fall when you can collect freshly-fallen leaves to preserve, to the earliest parts of spring when the first bulbs begin to sprout. Rather than getting depressed about the end of summer, get excited for winter with this wonderful book of ideas.

Books & Recipes – French macarons are my guilty pleasure.  I love the light, crispy yet chewy texture of the delicate cookies, and the sweet, buttery filling ranging from buttercream to chocolate ganache.  Intimidated as I was, I decided to give the fanciest of French desserts a shot.

Naturally, my first stop in my macaron adventure was our library, where I collected some cookbooks, including: The Art of French Pastry by Jacquy Pfeiffer, Bake it, don’t fake it! by Heather Bertinetti, and Bouchon Bakery by Sebastien Rouxel.

The Art of the French Pastry and Bake It, Don’t Fake It were both very helpful in introducing me to the world of French pastries, including detailed baking guides as well as helpful hints for novice bakers.  Bouchon Bakery is a beautifully photographed cookbook that made me believe I too could create Instagram worthy delicacies.  Additionally, I requested Macarons: Authentic French Cookie Recipes by Cecile Cannone through Interlibrary Loan,  which features a ton of recipes for both macaroon shells and fillings.

The first batch was an absolute failure and did not reach fruition.  Anyone who has made macarons will tell you how  crucial it is not to overbeat your egg whites; and mine ended up looking like a pile of soapy egg suds.  Yuck.

The batter was still fairly lumpy in my second batch but I persevered, hoping everything would magically work itself out, which somehow, it did!  My third attempt went 1,000 times better.  With the assistance of my sous-chef (aka: Mom), I managed to whip the egg whites into shiny, perfectly stiff peaks.  With the grace of an experienced baker, she showed me how to gently (so as not to collapse the fluffy batter) fold in the dry ingredients.

Three more batches and 12 hours (yes, TWELVE hours) later, I could bake no more, with over 100 macarons.  With some fancily piped Vanilla Buttercream (recipe courtesy of Cecile Cannone’s Macarons: Authentic French Cookie Recipes), even I was impressed by my handiwork. 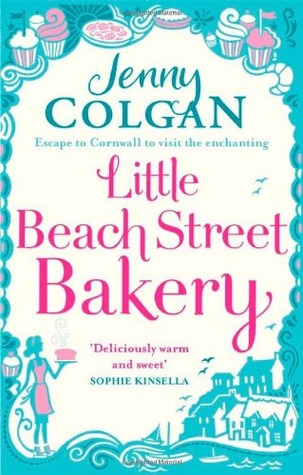 Book –  For a delectable romantic comedy, check out The Little Beach Street Bakery by Jenny Colgan.

Meet Polly Waterford, a distraught young woman who is reeling from a toxic break-up.  When she is forced to move out of her boyfriend’s apartment, she has nowhere to go.  And that’s how she finds her escape, on the seaside of Cornwall in a tiny little house in the middle of nowhere.  All alone and far from home, Polly is overcome with loneliness.  She does the only thing she can do, she bakes.  Soon, what was only a comforting hobby turns into much more as the locals discover Polly’s mouth-watering baked goods.

However, the town baker has taken an instant dislike to Polly who has stolen all of her customers.  Can Polly ever escape a life of drama? What will she do when her toxic ex-boyfriend shows up in Cornwall?  This charming tale is full of drama, humor and romance–and of course visions of fresh baked bread.  Enjoy this sweet story that will keep you cozy in the chilly months ahead.

As a sappy romantic, I adore a good love story.  I particularly love romances that take place in a bakery, or food service setting.  If you liked The Little Beach Street Bakery, try The Lost Recipe for Happiness by Barbara O’Neal, and Since You’ve Been Gone by Anouska Knight.

Book– Katie Lightfoot is a baker with a twist, she’s recently found out that she’s a lightwitch. What exactly that is, she’s not sure and is slowly figuring out. In this installment, Hollywood has taken over Savannah’s historic district. From her boyfriend Declan on security, to her friend Bianca as an extra, Katie’s whole group is involved while she’s happy to keep out and run her bakery. A fired caterer, a fixer, and an enterprising spirit pull her into the production and a dead body keeps her there.

The fourth in the series, Some Enchanted Eclair, is a fun romp through a deep-Southern community. I enjoyed revisiting the characters from earlier books and look forward to seeing exactly what a lightwitch is and how it impacts Katie’s life. Not only that, but the twist near the middle that shakes things up a bit is fodder for many more stories! If you’re looking for a fun, light read this as well as the earlier books in the series will surely delight.