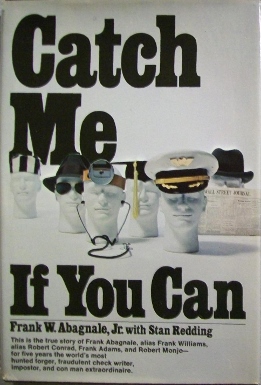 Book – Catch Me if You Can is the story of Frank Abagnale Jr. Frank was a pilot, a doctor, a lawyer, and a teaching assistant at a college all before he was twenty years old and all without a high school diploma. Catch Me If You Can tells his exploits as one of the most successful con men in history. I was absolutely floored when I heard some of the things he was able to get away with. I had to remind myself over and over that the era was a very different one and that computers were nowhere near as sophisticated as they are now, but still, the things people will believe when wrapped up in a believable package were almost sad.

One thing that really struck me in listening to this book, which Frank Abagnale has stated was exaggerated to a degree due to the co-writer’s editor’s demands, was the complete lack of malice in all of his actions. Not once did he set out to ‘get’ the little guy, he always targeted big corporations or banks with his scams. The man is brilliant and has since transferred his way of thinking towards helping the FBI and banks combat fraud.

I listened to the audiobook version and loved it. His story was also adapted into a movie and he is the only living person with a Broadway play based on his life.